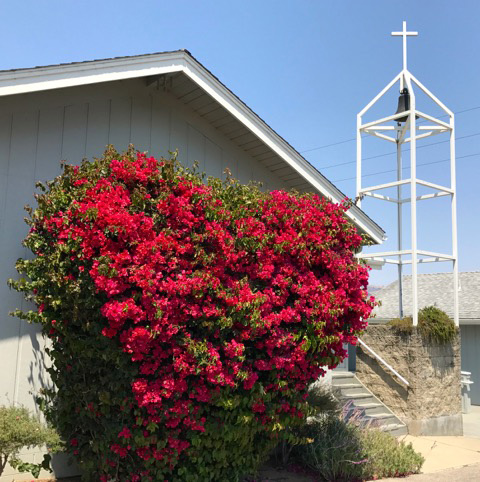 Safe Harbor Presbyterian Church is the congregation that continues the long Presbyterian USA legacy in Cambria. Safe Harbor began in 2016 and is under the guidance of the Presbytery of Santa Barbara.

What is today Safe Harbor Presbyterian began as a dinner fellowship group while planning for the future. From the beginning the Presbyterian legacy group received broad-based ecumenical support. St Paul’s Episcopal Church and the Rev. Brian Palmer offered use of their campus and encouragement to remain loyal to Presbyterian beliefs of acceptance and loving reconciliation when the members loyal to the national Presbyterian Church were not permitted to use their former Community Church campus.

Falasco was the advocate for the Presbyterian USA faithful during the breakup and departure of CPCC to the Evangelical Covenant. The Rev. Hulet offered counseling and a study group to the displaced Cambrian Presbyterians. In the ensuing months, a partnership developed, the Cambria Dinner Fellowship.

The Cambria Dinner Fellowship committed to the polity and theology of the Presbyterian Church USA that welcomes all people. An ecumenical organization began to blossom. People of all faiths, those without church history, and the curious began to meet weekly. The long and diverse list of program series is found elsewhere on this site under the history of CDF, the Cambria Dinner Fellowship.

After a year of Sunday worship, the group of founding members invited Reverend Eugenia to become our Mentoring Pastor and liaison with Church Development Committee of the Santa Barbara Presbytery.

The reconciling and tolerant standards adopted by the majority of the thousands of Presbyterian Churches in the United States remain foundational to Safe Harbor as the continuing and rich Presbyterian legacy in Cambria.

Presbyterians have a deep history in Cambria and the north coast.

In 1865, the Reverend B.F. Music, a Presbyterian Minister from Salem, Oregon, settled in Green Valley. He, along with James McFerson of the Santa Rosa Creek area, and Mr. J.Q. Buffington of Harmony Valley, invited people to meet for worship and study. In 1860 they began meeting at the James Taylor home as a church group.

In time they began meeting at the Cambria Minor-Dickie Store. Eventually the group organized under the Presbyterian Synod of the Pacific. A request was sent to Rev. Thomas Fraser the Superintendent of the Pacific Synod. Fraser came to Cambria in September 1874. On September 20th, Rev. Fraser led a worship in the newly built Grange Hall. Following the service, 19 people formally organized first Presbyterian Church.

The Reverend R.S. Symington became the first pastor and shortly after his appointment, plans were established to buy land and build a house of worship.

Henry Williams and Merritt Trace and his son, Verne, built the church in 1874. 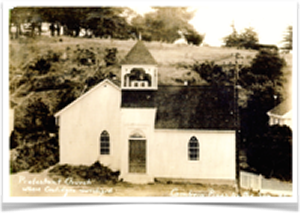 Presbyterians build the Community Church in 1967. In 2012 a group not loyal to Presbyterian values began an effort to leave the denomination. They sparked a difficult and painful period that witnessed a decline in membership and participation. Eventually they dropped affiliation with the Presbyterian Church USA and that opened the door to the efforts that now continue the long and proud Presbyterian legacy in Cambria with the establishment of Safe Harbor Presbyterian Church.